The monsoon, moonsun, monsoon, or season winds are winds that blow periodically and between one period and another the pattern will be opposite and change direction opposite every half year. In Indonesia there is a west monsoon and east monsoon winds. West monsoon is a wind that blows from the Asian Continent (winter) to the Australian Continent (summer) and carries moisture content which is mostly due to winds passing through vast waters and oceans to the west of Indonesia, for example the South China Sea and Ocean Indies. West monsoon winds cause Indonesia to experience the rainy season, in normal conditions the western monsoon occurs between October and April each year.

Marcopolo is actually an Italian adventurer and sailor who is famous for his voyages from Italy through the silk route including the Indonesian archipelago which at that time was a very difficult thing to do because it had a very high risk. However, the term marcopolo lately is often used to refer to pilots who make flights on bad weather conditions whether intentional or unintentional.

Flight during the rainy season can increase the risk of incidents and accidents, especially flights of piston-engined aircraft that still use carburetor. Because no single aircraft is allowed to enter into conditions known to be at risk for icing, we can see the statement in each pilot operating handbook or the manual information in the section limitation. One form of icing on a plane is the carburetor icing.

Marcopolo often reasoned "I will fly IFR, so it's okay to enter low visibility, enter clouds or rain", indeed flying instrument flight rules (IFR) did not mention the conditions for not being able to enter the cloud but the aircraft used had its own limitations. like Cessna 172P it is not permitted to enter conditions that are known to be at risk for icing. It could be that the pilot may but the plane is not, and vice versa.

According to the United States Transportation Safety National Commission (NTSC) report from 2000 to 2011, at least 250 accidents had occurred on aircraft caused by carburetor icing. From the evidence that one of the causes is "the pilot cannot recognize weather conditions that result in the appearance of carburetor icing".

Before we go further, it's good to repeat the working principle of the carburetor itself. The main function of the carburetor is as a tool to mix air with fuel in certain comparisons. Then the mixture will enter the cylinder through the ventury tube so that the velocity of the mixed flow increases while the pressure decreases, this phenomenon is called the ventury effect.

The amount of power (power) produced by the engine depends on the amount of air and fuel mixture being burned in the cylinder. Whereas the carburetor icing can cause the air mixture with the fuel that must enter the clogged cylinder which then results in the loss of power produced either partially (partial loss of power) or overall (total loss of power). 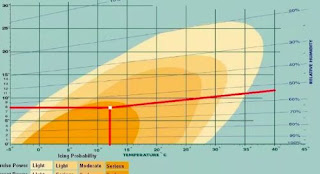 A cross country flight was planned to fly at an altitude of 8000 feet, with an average surface temperature of 28oC with an average dew point of 24oC. The following steps can be used to predict the possibility of icing carburetor:

If a hazard changes into a risk and then the risk we cannot control, the subsequent effects can result in an incident or accident. Therefore, before the hazard changes to risk, an assessment of risk is expected to be assessed (assessing risk). By predicting the possibility of carburetor icing, it can be an effort in the framework of the assessing risk process whose output can be used to make the best decision for mutual safety. The best place to make a continue flight or cancel flight decision is in flight operations (flops) rooms where analytical decision making can be done comprehensively and logically, not in-flight which tends to produce speculative and automatic decisions.
Facebook
Twitter
Pinterest
More
Less
Tumblr
Mix
E-Mail
GMail
LinkedIn
Reddit
XING
WhatsApp
Hacker News
VK
Telegram
OK
Messenger
Line
Copy Link