WHY DOES PILOT NEED CO-PILOT?

Before we discuss the importance of the Co-pilot position, we should first know about the position and understanding of the Pilot. A pilot is a term for people who drive an airplane a profession that requires expertise / skills in driving an airplane, a pilot must take an official exam held by a flight school. If it is declared pass the exam, a pilot will get a flight certification, which is a letter acknowledging the pilot's ability to fly a plane of a certain type / size.

During the flight, inside the cockpit he had the idea to save his passengers:

In his work in the cockpit of the aircraft, the pilot was assisted by a co-pilot. During the flight since taking off until landing, the pilot and co-pilot will follow the programmed flight paths through aircraft navigation assistance and follow the information provided by the airport traffic control tower. 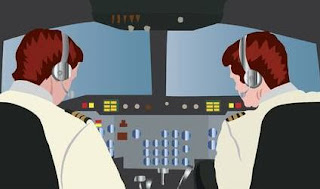 And now we will discuss a little about the position of the Co-Pilot in a flight and the importance of its existence in a journey. Co Pilot is a person who helps pilots in flying planes. The conditions as a co pilot are almost the same as that of a pilot, among others are not to be afraid of heights, to take part in training at aviation flight schools and so on. When the pilot cannot fly the plane on an ongoing flight because of one reason or another, the co pilot replaces his role to continue the flight. Co Pilot is also referred to as First Officer (FO)
Talks made by the pilot, co-pilot with traffic control tower officers from and to an airport will be recorded by a black box.

And to answer the question about why the pilot needs the help of the Co-Pilot, see some explanations and information below. The duties of the co-pilot are to accompany the captain on duty. When the captain was flying a plane, the co-pilot had the duty to monitor the course of the engine and help the captain in navigation. The co-pilot does not have to rank below the rank of captain, it may be that the co-pilot and pilot are both ranked four, because the co-pilot is not an assistant, but is called the vice captain. That is the reason why a pilot is accompanied by a co-pilot. When running an airplane, of course, a captain needs help to fly a plane. And the person who helped him must be an expert at running an airplane. Cooperation between the pilot and co-pilot is very important, if the pilot and co-pilot are not compact, it can endanger the safety of passengers and themselves.

In running the plane, it was not just a pilot who played an important role, but a co-pilot also played a role in helping a pilot in terms of navigation or other matters related to running an airplane.
Facebook
Twitter
Pinterest
More
Less
Tumblr
Mix
E-Mail
GMail
LinkedIn
Reddit
XING
WhatsApp
Hacker News
VK
Telegram
OK
Messenger
Line
Copy Link